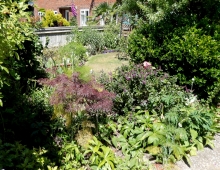 This year the residents of Storrington were invited to nominate either themselves or their neighbors to enter the Local competition. We had an overwhelming number of entries which were whittled down by our independent judge into these finalists. Placings will be announced at our award ceremony in September 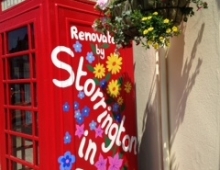 In 2014 Storrington in Bloom decided to it would be a benefit to the community to install a public use defibrillator in the little used and crumbling phone box in the centre of Storrington. To do this we needed a charity to adopt the kiosk from BT and also to raise funds. After protracted negotiations with BT the transfer to the Storrington and Sullington Community Partnership was achieved and the phone was removed. The Community Partnership also awarded us a grant towards the project. They then passed the operation to Storrington in Bloom. The kiosk was in a bad state of repair but this was attended to by Pete Harmon of "Wood'n Pots and Things" who kindly donated his labour. Several volunteers then gave it a new coat of paint and an electrician was employed to connect the necessary heated cabinet which was bought through The Community Heartbeat Trust. We are now ready to install the defibrillator. Once it is installed it will be supervised by Storrington Area First Responders (START) who will check it regularly. 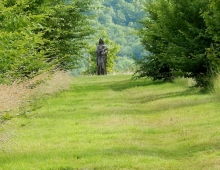 The 4 acre site , owned by the Norbertine Order ,was previously a fallow field, used in latter years primarily for the village Bonfire night celebrations In 2007 a community woodland project was initiated by volunteers from the Catholic parish 500 trees (all native British species) were planted, to include a processional avenue of Hornbeams 1100 mixed native sapling bushes and wild roses have now matured into a 100 metre hedge bordering Storrington tennis club the walkways and processional avenue are all maintained by local volunteers 10 oak benches were assembled and installed by 2 retired parishioners; one bench has been simply inscribed with the name ‘Matt’ in memory of a young man who sadly died very young Matt’s Meadow is open to all to stroll or sit quietly and enjoy the beautiful tranquil setting in full view of the South Downs, the village church and the Priory 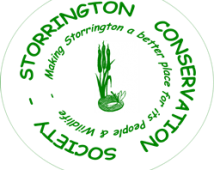 Since its formation Storrington Conservation Society’s Achievements include: Undertaking a variety of conservation projects such as pond management, tree planting, footpath and management. Achieving over 5,000 volunteer workdays in making Storrington a better place for its people and for wildlife. Raising awareness of wildlife related issues at our periodic lunchtime talks. Establishing and coordinating a weekly programme of Healthy Walks in and around Storrington. Being one of the major voices in convincing the District Council to build the Riverside Walks and carrying out the major refurbishment of the Mill Pond.. Fryern Dell Project In 2013 Storrington Conservation Society embarked on its most ambitious project the improvement of the old Fryern Hall Pleasure Grounds. 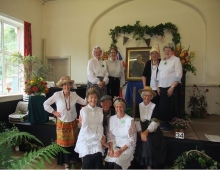 Storrington Horticultural Society is reputed to be the oldest in Sussex and maybe even further afield and was first recorded in 1864. In 2014 we celebrated 150 years with esteemed speakers visiting us, namely Roy Lancaster, Helen Yemm and Fergus Garrett; enjoyed a ten day holiday touring the gardens of Italy, and had a celebration birthday tea at Wiston House. The major accomplishment was the recreation of the first ever show. This took months of research at Chichester archives, finding early schedules and peering over sepia photographs. Eventually we had a show schedule that reflected the type of classes entered, vegetables, flowers and fruits of earlier times and suitable prizes, all very different from the modern day. The hall, presided over by a large picture of Queen Victoria, was decorated with ivy swags, flags, and ornate Victorian flower arrangements; the classes were displayed on hessian or in jam jars. The members and Committee all dressed in costumes of the era, the teas only served cakes made from Victorian recipes and live music was played by a local folk band. A very happy and atmospheric afternoon was enjoyed by all. Our final occasion of the year was the planting of a tree, a Ginkgo Biloba, in a local green space opposite the village pond, to commemorate 150 years of Storrington Horticultural Society. 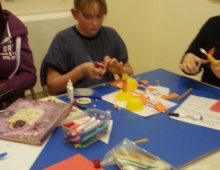 On Wednesday 19th November, 2nd Storrington Guides had a themed evening to celebrate the life of Cicely Mary Barker creator of the flower fairies in recognition of Storrington in Bloom’s local theme for 2015. The Guides created fairy toadstools from marshmallows, learnt about Cicely’s life, read the flower fairy poems and created flower fairies of their own. A poster was created for display in the village. 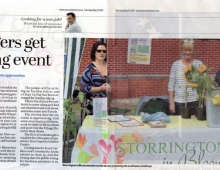 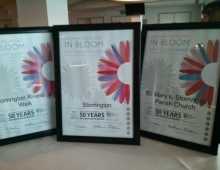 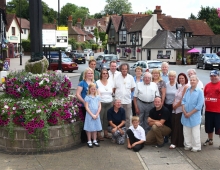 What a beautiful sunny day to show our judges round. This morning Storrington In Bloom had the pleasure of showing judges Hazel and Reg all the highlights of our small town. With only 2 hours we could only show them a snippet of all the amazing projects that the team have achieved.

Check in at the all new 5* Storrington Bugs Hotel 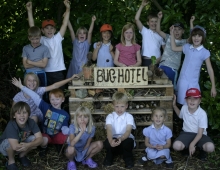 On Tuesday 15th July 2014 a group of children from Storrington First School came along to the village pond, Storrington to help construct this insect haven. Like all good workmen the afternoon started with a cupper and a biscuit - but before long the team were well away. Using a mixture of recycled goods our 6 storey tower is now pride of place in the village ready for its new occupants. Big thank you to all the children who helped, all the mums and dads who got messy and Tim and Archie 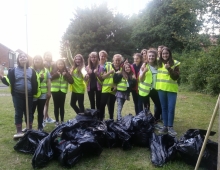 On Wednesday 9th July, 2nd Storrington Guides joined Friends of Meadowside in a clear up for Storrington in Bloom. The girls split in to two groups, one litter picking around the meadow area and stream, the remainder heading to the library car park with brooms and litter pickers to clean up the library car park and steps. In just over an hour between the group of 18 they managed to collect up 10 bags of rubbish and several large bits of metal and wood! This demonstrates how much it is possible to achieve in a short amount of time if you put your mind to it 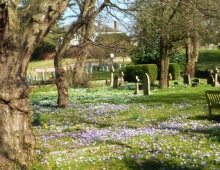 Our 2014 entry is for the small town category. So far our volunteers have spent 2279 hours and planted 7633 plants getting ready for the judges who come to the village on 15th July.

Getting ready for the judges 2013

Our 2013 entry was for the small town category. Our volunteers spent 3745 hours weeding, fundraising, sweeping, organising and planting for this years entry, and we planted a grand total of 10217 plants (7800 of those plants were for our newly refurbished village pond). 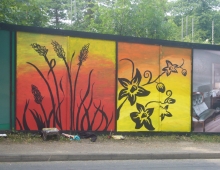 Rydon community college came up with these beautiful wild flower designs to help brighten up the village.

In Autumn 2012 we held a Storrington In Bloom Barn dance at our Village Hall. It was an amazing turn out and raised a whopping £600.

In our first year we entered the Town High Street category only. As small group of residents wanted to make the village a nicer place to live, so we took to the streets with brooms, hanging baskets and weeding tools and planted a little seed in the heart of Storrington to make the village brighter. We were absolutely amazed to find out we had been awarded a Silver. This was all thanks to the great community spirit of Storrington.

Meadowside work to get a new play park 2012

Friends of Meadowside formed in 2011 when the local residents joined together to raise funds to improve their park and to protect their beloved meadow from becoming another building plot. In 2012 they celebrated the grand opening of their newly refurbished park opened by childrens TV presented Dave Benson-Philips. 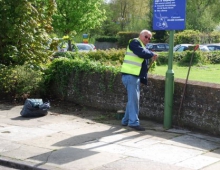 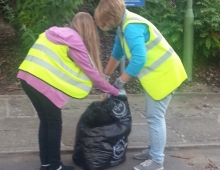 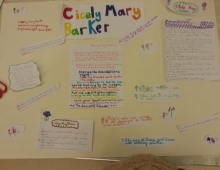 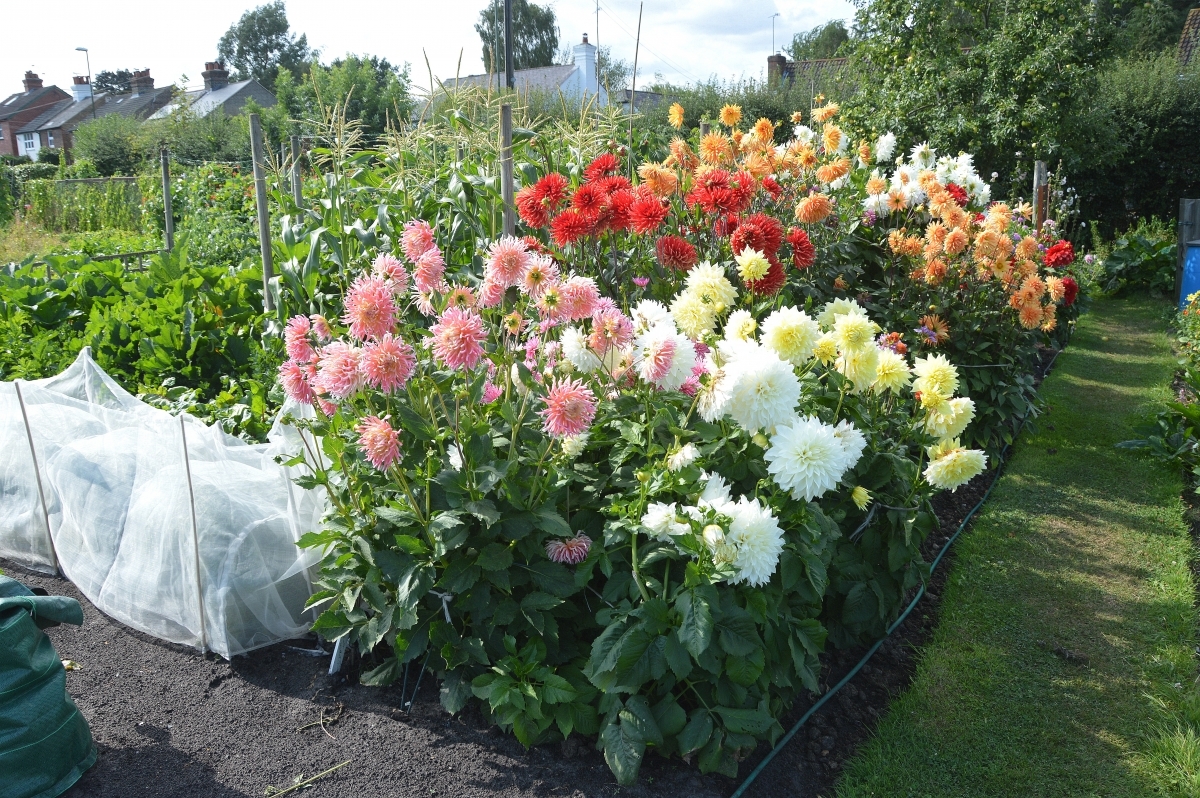 With thanks to our sponsors

And a BIG thanks to all our volunteers and local businesses without whom none of this would be possible.